14 December 2018
So incredibly cool to be back in the porcelain city of Jingdezhen, China (last time was in 2013 for an exchange project with Delft 'Blue revolution', organized by Adriaan Rees).
It is not the best time to be here in terms of temperature.
Especially if the municipality decides to put the entire inner-city district without electricity for 24 hours. It was a rather fresh night, but I got an extra blanket. And therefore no coffee in the morning. But mushroom soup with eggs in the morning because the restaurant downstairs was open. And other stores worked on an aggregate.
I am really the only foreigner in the city (I am often stared at, haha), I really have not come across one, okay except in the pottery workshop (artist in residence place), but they do not come out of their studio's (at least I think ;-)
Everyone is super nice, in shops, restaurants and especially at the factory where I am working.
Also there it is freezing cold, no heating, so I work with three layers of clothing and a coat. But they do have a small stove arranged for me, so it is not too bad actually.
The factory is located half an hour from the center, and today two taxi drivers could not find it, the first one put me off in the city, the second had to call first with three people and a central.
Yesterday a bit too much rice wine at lunch and then back on the scooter back to my hotel, rollercoaster.
Many scooters, many cars, but nobody drives really hard (at least not as those complete idiots in The Hague that almost rattle me and my children off our bikes).

The first day here I was a tourist and archaeologist and I found a lot of ancient porcelain.

23 December 2018
Yes, you are nothing in China without a scooter!
And here are some more clichés, yes, everybody in the factory  gurgles the whole day and spits on the ground, and the traffic is a real chaos, but still it runs smoothly and smeared, and especially with 3 people together on a scooter + a baby.
And almost all men smoke, and I get a cigarette offered by visitors about five times a day, which I kindly refuse.
And it is hilarious when I walk into an unfamiliar neighborhood supermarket and say Ni Hoa (just hello), everybody thinks it is funny.
Usually they say ’Hello!' to me.
The boss of the factory is a very friendly 66 years old boss  who lives in the factory. Every afternoon at 12 o'clock he cooks a fantastic meal and then I sit down with him on a chair at the table, while the other employees stay or sit here and there in space. The television on the CCTV 30 minutes of news. We communicate via my Google translation app and the same kind of app on the phone of Xiao Feng, the cousin of the boss that I can get along with very well. We have such strange conversations and humor turns out to be quite universal. They especially have to laugh when I try to speak Chinese, that goes pretty well with talking, but I forget about it too quickly, unfortunately I do not have such a linguistic talent. And we talk about Brexit and the army of China (if that is on TV). And we drink Baijiu, a strong drink, at lunch, and then we toast. I tried to refuse once, and no, that was not possible. Today I said that I did not feel so good and if I could get boiled water, of course no problem.
Besides the boss, there are two permanent employees for the heavy work. And four part-time painters. One of the four is a young girl who comes in with a double coat and hood, never says anything and starts painting with gloves on for a few hours and then leaves, her work is taken over by a boy at another time. There is also a muscular guy who throws the vases on the wheel.
Xiao Feng brings me to my hotel in the evening on the back of his scooter. He used to be a hoodlum, but now has a family with young children. Tonight he showed me his scars, nowadays he is just a really friendly guy.

In the morning I eat mushroom soup in the restaurant under my hotel. The owner is a really handsome lady, she works 7 days a week from about 6 in the morning until 9:30 in the evening.

We paint here with Cobalt, which is black before firing and turns blue after firing.
When the painting is finished, the vase is sprayed with glaze that will give the shine after firing. If a vase needs to be sprayed with glaze the boss tells me to leave the building. I suspect that people here are still using lead glaze that is forbidden in The Netherlands.
Furthermore, painting is as what I am used to, only the enormous surface of the vase did take some time getting used to. 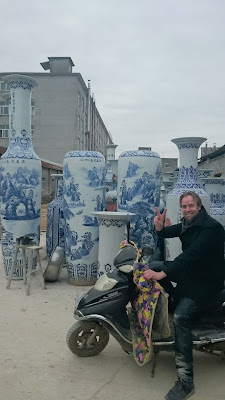 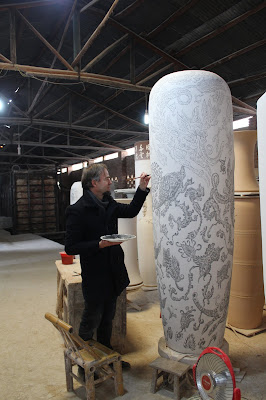 Pepijn van den Nieuwendijk
Dear visitor of the Cirque de Pepin blog, my name is Pepijn van den Nieuwendijk. I live in Den Haag (The Hague) in the Netherlands where I work as a Painter, (ceramic-) sculptor and Illustrator. The name of my studio is 'Cirque de Pepin', which is French for 'Pepijn's Circus'. More information about me and my portfolio you can find on my website: www.pepijnvandennieuwendijk.com More pictures of my artwork and work-in-progress you can find here: http://www.flickr.com/photos/pepijn-van-den-nieuwendijk/ If you have any questions, please feel free to contact me.